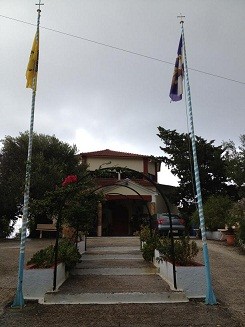 The Church of Agios Raphael is located at Perachori, Ithaca. It was completed in 1980 and designed as a polygonal church. The wooden iconostasis dates from the 17th century and it was transferred here from the church of the Dormition, the Palea Panagia of Perachori, after it was destroyed by the earthquakes of 1953.

The temple was built on the same location where, according to tradition, was the parental home of Agios Raphael. This particular temple is also dedicated to Agios Nicholas and Agia Irene, who according to tradition, were tortured and died as martyrs with Agios Raphael at Karyes of Lesvos. The church celebrates majestically on the first Sunday of July and during the afternoon of that same day a litany of the icon is held at the promenade of Vathi.

Some biographical information and further details concerning Agios Raphael, as recorded in the book of the priest Theodosis Dendrinos, commissioner of the Church: “Agios Raphael left his beloved island, Ithaca, the famous island of Odysseus, at a young age and went to Mistras to complete his education. He studied medicine and later philosophy. After completing his studies he was ranked as an officer in the Byzantine army. At the age of 35, in 1444, he became a monk in the Holy Monastery of St. John the Baptist in Serres. He gradually got all the degrees of priesthood and became dean. He served as chaplain in the church of Agios Demetrios Loumbardiaris in Athens, and in 1449 he went to the Patriarchate of Constantinople. In 1454 after the fall and conquest of Constantinople, he found refuge with Deacon Nicholas in Lesvos that was ruled at the time by the Franks. He became abbot at the monastery of Karyes. On 9 April 1463 he was tortured by the Turks and died as a martyr”.