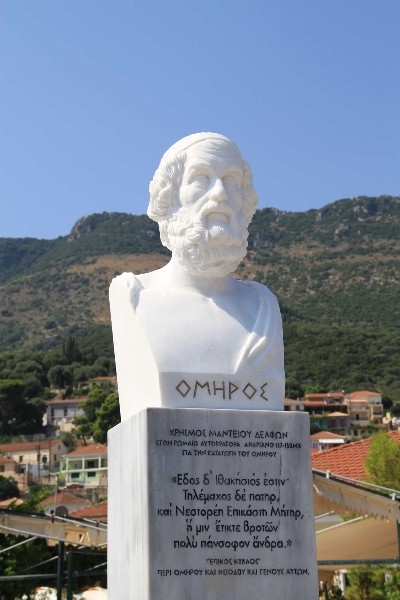 The bust of Homer is in the central square of Ithaca, Vathi. It was created by sculptor Stathis Alexopoulos and made from white marble with the sponsorship of Gerasimos K. Vallatos. The prophecy of the oracle of Delphi for the emperor of Rome, Hadrian, is engraved over the base of the bust of Homer: “ΕΔΟΣ Δ’ ΙΘΑΚΗΣΙΟΣ ΕΣΤΙΝ ΤΗΛΕΜΑΧΟΣ ΔΕ ΠΑΤΗΡ ΚΑΙ ΝΕΣΤΟΡΕΗ. ΕΠΙΚΑΣΤΗ ΜΗΤΗΡ, ΗΜΙΝ ΕΤΙΚΤΕ ΒΡΟΤΩΝ ΠΟΛΥ ΠΑΝΣΟΦΟΝ ΑΝΔΡΑ”.

Homer is the poet who made Ithaca renowned around the world and throughout the centuries. In his epic Odyssey he describes the adventures of Odysseus, king of Ithaca, on his journey home after the Trojan war. The bust of Homer in the center of Ithaca reminds us that, through the work of the poet, Ithaca became the universal symbol of longing, homesickness, but also of the belief that achieving a goal is always possible.

The unveiling of the bust of Homer took place in August 2011.