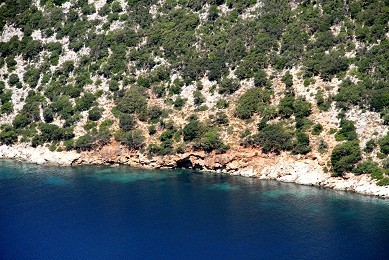 The Cave of Loizos was a center of worship of the Mycenaean civilization. It is located in northern Ithaca in the Bay of Poli. You will find it to the west of the bay, at a walking distance from the beach, where you will see an information board. It was destroyed by an earthquake and now the Cave of Loizos remains underwater.

Dimitrios Loizos was the man of Ithaca who was the first to discover the treasures of the Cave, in 1868 – and he gave the cave of Loizos its name. What he had discovered was an ancient Greek burial site, containing a knife, a sword and coins. In Ithaca, at that time, the famous archaeologist Heinrich Schliemann was conducting excavations and he was the one to recognize its value and explore the cave.

The findings that have been recovered from the Cave of Loizos, are considered extremely important for the history of Ithaca and are exposed in the Archeological Collection of Northern Ithaca in Stavros. Among them are bronze tripods, used for libations to the gods and the most important finding of the archaeological research in Ithaca, the fragment with the inscription «ΕΥΧΗΝ ΟΔΥΣΣΕΙ», which proves that the Homeric hero was a real person.

The Cave of Loizos is today inaccessible to visitors.