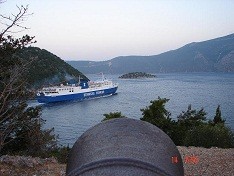 On the small hill above the beach Loutsas at the harbor, there stand, from the time of the Venetian rule in the Ionian Islands and in Ithaca, still intact two large iron Venetian cannons. The cannons are located at the entrance of the harbor of Ithaca, looking over the narrow passage of the bay – which is considered as one of the safest natural bays of Greece.

The Venetian Cannons, as is the official name of the monument, are part of a small fortress, built in 1807, during the second French occupation of the Ionian Islands. You will get here by following the short and easy path from the beach, turning at the respective sign. The view of the narrow entrance of the harbor of Ithaca from the Venetian Cannons is amazing.

It is estimated that the location was used for the fortification and the safety of the settlement, because at the time, pirates used to plunder the waters of the Ionian Sea, pillaging the towns and villages in their wake. The Venetian Cannons of Loutsa were the “peak” of the fortification: after a warning from the observatories that were positioned on the surrounding mountains, to have under close surveillance the sea and the enemy approaching from afar, the Cannons were readied to ambush the enemy and, if possible, to force him to retreat.