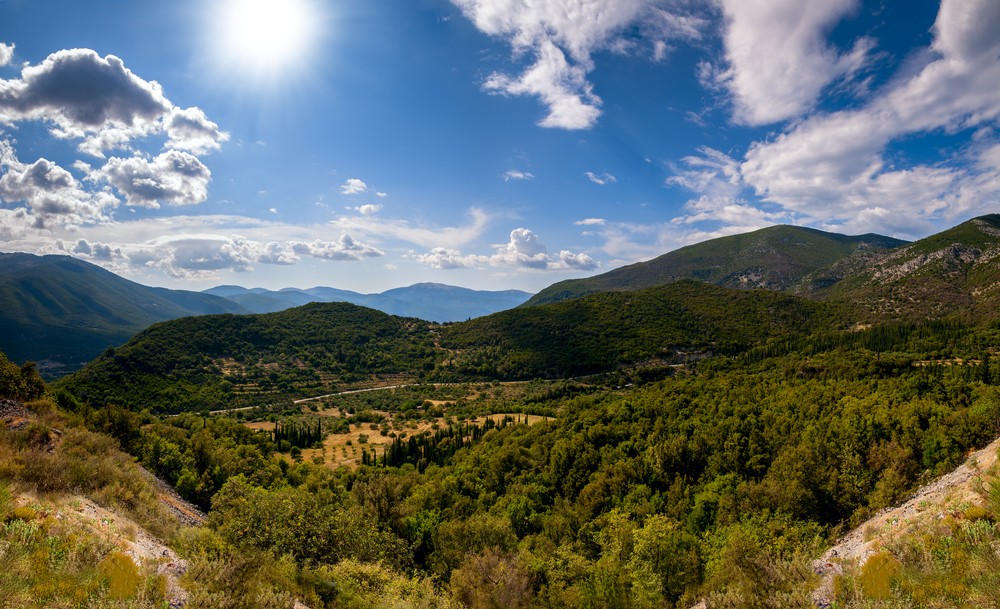 Enos is the highest mountain not only of Kefalonia, but also of all the Ionian Islands: its highest peak, Great Soros, reaches the height of 1,628 meters. Extends to the eastern part of the island and it is covered in most of its part by firs.

The fir from Kefalonia

The black fir that covers Enos, got its name from the island and called worldwide ‘fir from Kefalonia’. From the rarest trees of Europe, meet here with such density that made the Venetians to name the mountain «Monte Nero», i.e. “Black Mountain”. Already, in ancient times were known the peculiarities of the hard and strong trunk of the fir tree, so it was mainly used in shipbuilding. It is the only pine forest in Greek island and one of the main reasons indicating Enos as a National Park, since 1961.

The National Park: Flora and Fauna

Today, you can get by car to the limits of the National Park and then continue walking the paths of Enos, ride through nature and green, admiring besides the unique fir trees, but also about 400 species of plants! Among these, the only one in the world “violet from Kefalonia Viola” is a small purple flower that grows in the cracks of rocks, mainly at “Chionistra” of Enos. You will still see arbutus and holly, and some of the 100 bird species that had been recorded: fidaetoi, xrysogeraka, partridges, and jays, grouse, thrushes and black woodpeckers. Two tourist kiosks that will meet in your tour in the National Park of Enos will offer you moments of relaxation, while it is absolutely necessary to respect the Rules of Operation, as long as you’re there. The greatest threat to the forest is fire, which was the main cause of destruction, since ancient times.

The wild horses of Enos

If you are lucky, you will meet the famous wild horses of Kefalonia: a small group of small horses, Equus caballus, who lived freely in Enos, in semi-wild situation! Especially, after the Second World War, the villagers, who had their farms on the slopes of the mountain, left their horses freely, not to maintain them. These horses were abandoned sometime completely at random and “kept up to date in a few herds. Their livelihoods to the hard conditions of the region helped them to create special morphological characteristics: height 1,15-2,25 m, thick mane and tail, deep chest and narrow. The usual colors of horses are dark brown, black, light brown and white. Horses of Enos form in summer a herd of 10-15 people, “as we read on the website of the operator of the National Forest. The populations of horses had been dropped considerably today and have been taken extra measures for their protection.

The monasteries of Enos

On the slopes of Mount Enos, you can visit some of the most important monasteries of Kefalonia, starting of course by St. Gerasimos  in Omala . From the position Agrapidies towards the entrance of the National Park is the monastery of Aghios Eleftherios, grand festival of whom is right here middle of July. At an altitude of 800 meters above Arginia, on the east side of Enos we meet the Monastery of Zoodoxos Pigi of Arginia. A well with clean waters from the depths of Enos thirst here worshippers and visitors. Around the monastery lies the habitat of the wild horses of Enos. Going to Sami  now, we find the ruins of the Abbey of Grouspa, dedicated to Saint Nicholas. The monastery was founded in the late 16th century and operated until 1805. Finally, a little lower than the top of Enos, you will find ruins of sanctuary, dedicated to Zeus Ainisios or Aineios, citing by Hesiod in his work.