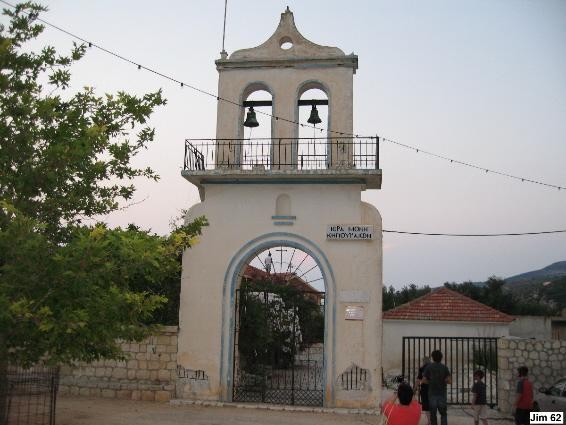 If you are in Lixouri and ask for “the monastery”, the majority will guide you to Kipouria. The Monastery counts more than 250 years of existence , having been established in 1759 by Archimandrite Chrysanthos Petropoulos from Paxos , who dedicates it to the Annunciation. It took its name from the many gardens (“kipoi” in greek) maintained there by the monks. It is built on a plateau of a rock, 100 meters above the sea level , in a unique landscape. It has view to the west with a courtyard for guests to attend one of the most spectacular sunsets of Kefalonia .

In the Monastery of Kipouria you can see the icon of Virgin Mary, the skulls of the first monks, but also a piece of the True Cross which had been donated to the monastery by the Russian prince. Here you can also see even in a separate glass bottle, myrrh from Saint Dimitrios Myrrhobletes, from the 7th century.

The first disaster came to the monastery in 1767 after the great earthquake. Later the periods of hunger and disease threaten the function of the monastery. In 1915 a French cruiser considered the monastery as a warship as its chimney was only discernible through the fog. The blow from the earthquake of 1953 was large and only during the 90s the ruined buildings of the monastery were built again by the lonely monk who is stiil there today .

The Monastery of Kipouria is 15 km away from Lixouri.