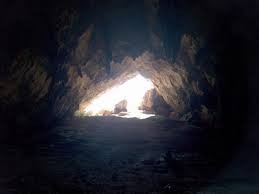 The Korukeion Antron is world renowned, with a history of thousands of years. It is located on the southwestern side of the Mount Parnassus, at 1400 meters altitude, on the slope “Palaiovouna” near to Delphi.

The entrance of Korukeion Antron isn’t visible until you find yourself right in front of it. This narrow, triangular opening will lead you to the great hall of the cave, a length of about 100 meters and a width of 15. Rich compositions of stalactites and stalagmites illuminated mysteriously from the small opening and the sound of the drops of moisture falling rhythmically and continually through the centuries, composeing a spooky and mystical setting – it is no coincidence that in ancient times it was considered one of the inputs in Hades.

The cave was investigated in 1970 and the findings are exhibited in the Archaeological Museum of Delphi. They found figurines and jewelry already Neolithic and the objects dating from the Archaic to the Roman period are thousands: mainly for offerings to the nymphs and the god Pan. The Korukeion Antron is used as a sacred place of worship and oracle at that time. Pausanias refers a running source through it. He returns the name of the Kwrukeia Numfi, but many interpret as Korukeion Antron as a reference to stalactites, resembling as large ascites, ie korikas . Geologists believe that the cave was created during the Pleistokeno, the Ice Age and it consists of two rooms and a narrow, rough and long hallway. Locals often call it “Sarantavli”, an abbreviation of ‘ forty yards “.

Due to the almost hidden entrance, it was used as a shelter in different historical circumstances: in 480 BC the inhabitants fled here the habitants of Delphi to protect themselves from the Persian attack, while in 1821, it is said that here was fortified Odysseus Androutsos. The formations of stalactites and stalagmites resemble as sculptures carved by the most excellent craftsmen, while in some places you will read ancient inscriptions. After you have enjoyed the beauty of the cave, go out and enjoy the view, with clean air, till to the Peloponnese!

To the Korukeion Antron reaches a dirt road passable by an average vehicle. There is a parking at the end of the road, from which starts the very short stone path.