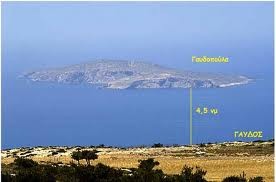 Gavdopoula is a rocky islet, which is located four nautical miles north of Gavdos. The islet is no longer inhabited and it is administratively a part of the regional unit of Chania, 32 miles from Paleochora and 22 from Sfakia.

Gavdopoula is an important stop for migrating birds, during their long journey from Africa to Europe and vice versa, as well as a nature reserve for two endangered species: the Mediterranean monk seal (Monachus monachus) and the sea turtle (Caretta caretta).

The shallow waters between Gavdos and Gavdopoula host bottlenose dolphins (scientifically known as Tursiops truncates) that are occasionally observed swimming near the coast of Crete.

Gavdopoula is surrounded by waters of great depth. On the southwest side of the islet, there are several rocks suitable for observation for those who love deep-sea swimming and diving.

On the northwestern edge of this islet, there is a lighthouse aiming to ensure the safe passage of ships through the strait between Gavdopoula and Gavdos. The highest point of the islet is located 133 meters above sea.

At Gavdopoula archeologists have discovered the ruins of an Early Minoan settlement.