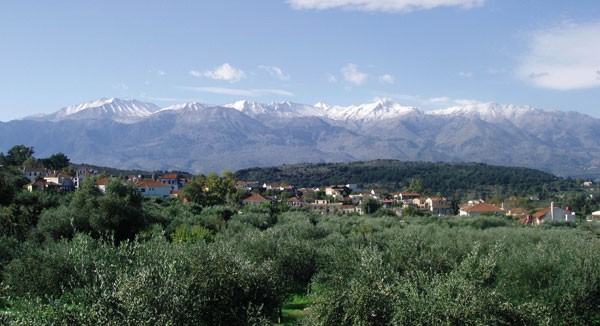 Vamos is a semi mountainous village, located at an altitude of 200 meters and it is part of the municipality Apokoronas. Vamos is located 28 kilometers from Chania. The area of Vamos is surrounded by a lush landscape and by arable lands.

Vamos is approximately inhabited by 800 residents. In this village, you can find a multitude of products and services that are not available in other surrounding villages, such as supermarket, bakery, grocery store, internet cafe, court, post office, bank, police station, health center, gas stations, etc.

Vamos was highly developed during the second half of the 19th century, when the region constituted the capital of Sfakia. This growth and wealth are denoted by the luxurious houses and the public buildings of the village which were built based on elements of the neoclassical movement and architecture. For the erection of the houses belonging to the wealthiest families of the region, local building materials -such as stone and wood- were used and still impress every visitor.

According to historical sources, Vamos was first inhabited be Arab pirates who arrived there in the 8th century AD. During the Ottoman rule in Greece, Vamos was the headquarters of the Turkish army and in 1863 a Turkish pasha (title for Turkish officials) -named Savvas- chose Vamos as the seat of the entire province of Sfakia.

In the traditional village of Vamos, visitors have the opportunity to see the street made of stone, the old neighborhood, the chapel of the Virgin Mary dating from the 13th century and the Karidi Monastery, with its astonishing oil mill and its 12 vaults.

The two more recently built churches of St. Nicholas and St. George, the restored Old School (1863) and the old building of the Girls’ school, which is today used as a community hostel, attract everyone’s interest.