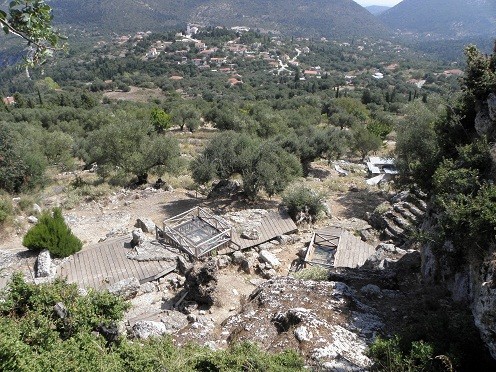 The hill of Piso Aetos, on the top of which is located the ancient acropolis of the city of Alalkomenes. The site has been excavated several times, already from the 19th century. The remains of the walls are impressive mainly because of the size of the boulders, so the walls of Alalkomenes in Ithaca are known as “Cyclopean”.

The excavations include the ruins of dwellings, tombs and ancient temples. According to the findings, ancient Alalkomenes was an important settlement with an area of about 400 acres, that probably belongs to the post-Odyssean era.

From Piso Aetos, from where the church of Saint Georgios is, starts the path uphill, that leads the visitors to the top of the hill ( 380 m), to the acropolis of Alalkomenes. It’s a pretty tiring but brief walk, as the path is pretty steep.

Ancient coins with the heads of Odysseus and Athena that were found in Alalkomenes, as well as various other findings from the excavations are now exhibited in the Archaeological Museum of Vathi.