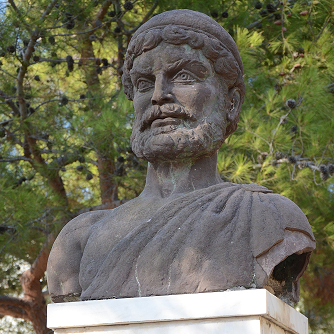 The bust of Odysseus, of the, according to Homer, ingenious king of Ithaca, is located in the park, in the central square of Stavros, the largest village in northern Ithaca.

Haughty and stern, Odysseus, after 20 years in exile, as the artist imagined him, watches his surroundings. In front of the bust of Odysseus is the inscription «ΕΥΧΗΝ ΟΔΥΣΣΕΙ» which means “prayer to Odysseus”. It comes from a dedicatory inscription found fragmented during the archaeological investigations in the Cave of Loizos, in Poli. The fragment was part of a clay female bust (2nd-1st century BC) and is considered one of the most important findings in Ithaca, as it demonstrates that Odysseus was worshiped as a god for many years.

The bust of Odysseus is one of the attractions of archaeological interest that can be seen in the park of Stavros. Until 2011, when the statue of Odysseus was unveiled  in Vathi, the port of Ithaca, the bust was the only depiction of the hero of Homer on the island.