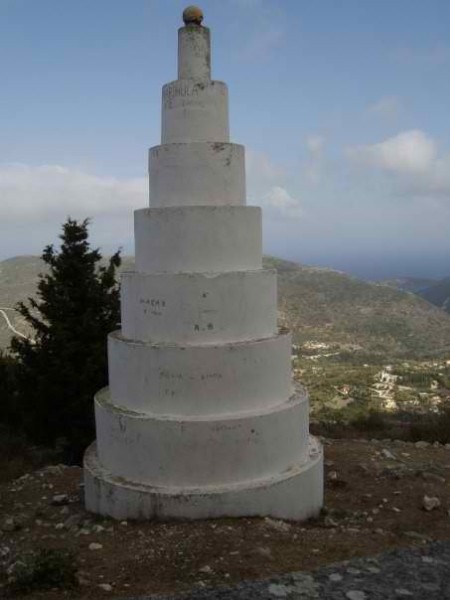 A rather strange and unexpected sight, and by far not the only one at the island of Ithaca, are the Pyramids of Exogi. They are located at the end of the northern village of Ithaca, Exogi and have nothing to do with the famous pyramids of Egypt, so do not expect to see the Great Pyramid of Giza! What you will actually see is two pyramids, the one triangular and of about 3m height and the other one cylindrical and a little bit taller.

The pyramids of Exogi are located near the cemetery of the village, in an area with lush and dense vegetation and an endless view across Aphales, the large bay of northern Ithaca. You can reach the Pyramids by taking the main road of Exogi, that passes through the picturesque old houses – it is one of the oldest villages of Ithaca, with its houses built in the 17th and 18th century.

The pyramids of Exogi are illuminated at night and can be seen from far away, from Stavros and Platrithias. They were built with millstones, the work of E. Raftopoulos and they constitute a funerary monument.