Cave of St John the Hermit 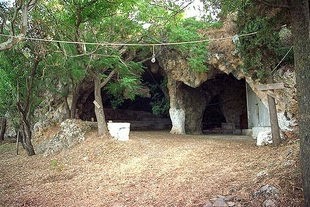 The Cave of St John the Hermit is located near the gorge of Avlaki, beside the abandoned buildings of the Monastery of Catholic in Akrotiri of Chania, within the administrative boundaries of Platanias.

The history of the cave is associated with the ascetic life of the hermit John, since he lived there – according to researchers – in the 6th century.

The Cave of St John the Hermit looks like an oblong arcade. Its length is about 135 meters and the scientists believe that it is essentially a prehistoric river bed.

Near the entrance of the cave of St. John the Hermit there is an underground water collector, while the sides of the arcade are decorated with stalagmites and stalactites.

The Cave of St John the Hermit exudes a religious character, as it is adorned with icons and ecclesiastical objects that hang on its walls. To the right of the arcade there is a ‘room’ with human bones and at the end of the cave there is a stone basin, called “rock of John ” and it is said that it is where the hermit died.

According to tradition, John died after his injury with an arrow, as a hunter mistook him for an animal and shot him.

The hermit asked to be taken to this place in the cave to die and ever since the worshipers consider this rock in the cave of St. John the Hermit miraculous. The church dedicated to the saint is built to the right of the entrance of the cave and celebrates on 7th of October.