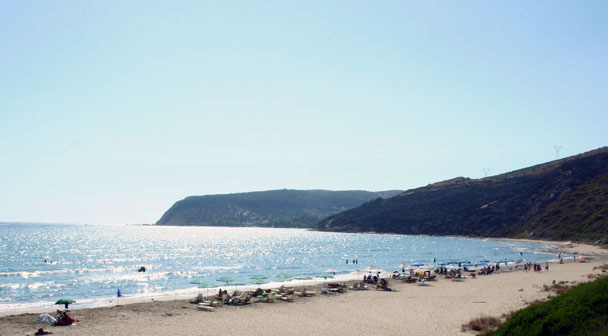 One of the largest sandy beaches of Kefalonia, Kaminia is located in the southern part of the island, near the village Ratzakli, in the surrounding area of Skala. The beach overlooks to Zakynthos and the sand is fine and golden. It spreads along, with shallow and relatively warm waters throughout the summer.

A section of it is organized with umbrellas and sun beds, but there is plenty of free space. Although, in Kaminia has always world, you will not feel jam and crowded, as its long length allows to everyone to enjoy the peace who seek. On the beach, you will also find a canteen and a few taverns that will serve you.

Kaminia is one of the coasts of Kefalonia that is a breeding ground of an endangered sea turtle Caretta – Caretta (caretta caretta). On the beach you will find various relevant markings, and there is an informative sign informs you about the turtle. Especially, at the end of the long beach, in the distinguished beach, called Munda, and if you are lucky, it is possible to see the turtles crashing from their eggs and running to water!

The beach was named Kaminia from the old ceramic kilns that were here, especially during the 19th century. The artisans, who used the abundant clay of soil, were renowned and supplied with tiles throughout Kefalonia, Ithaca and Zakynthos.

• Long at a length

• Place for the reproduction of the turtle Caretta – Caretta