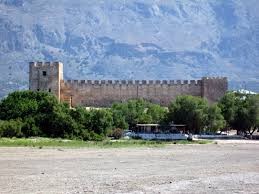 Frangokastello is a settlement consisted of houses, rooms to rent and taverns. The village was built near the homonymous medieval castle of the area. Frangokastello is located in Chania, in the south coast of Crete and 18 km east of Sfakia.

Frangokastello is one of the important sights of the region and it is famous for the “appearance” of Drosoulites, the shadows that the locals claim to see in the valley that surrounds the castle, every year in late spring. According to the tradition, Drosoulites at Fragokastello resemble to figures of horsemen or warriors and they are also supposed to be the ghosts of soldiers that were killed in a bloody battle that took place there. Scientific explanations attribute the phenomenon to some kind of reflection or an illusion.

The castle was built in 1371-1374 by the Venetians, in order to protect the area from pirates and from the often rebellious people of Sfakia. According to the tradition, Fragokastello was built during the day by the Venetian soldiers and in the evening, the Sfakians, with the Patsous brothers as leading figures, were demolishing what had been built so far. Eventually the Venetians arrested and executed the Patsous brothers who leaded the people of Sfakia and managed to complete the construction of the castle.

Apart from the medieval castle in the village of Frangokastello, both Greeks and foreign tourists are impressed and attracted by the beautiful beaches of the area: Frangokastello beach, Vatallos, Koutelos and Orthi Ammos (Good Sand).