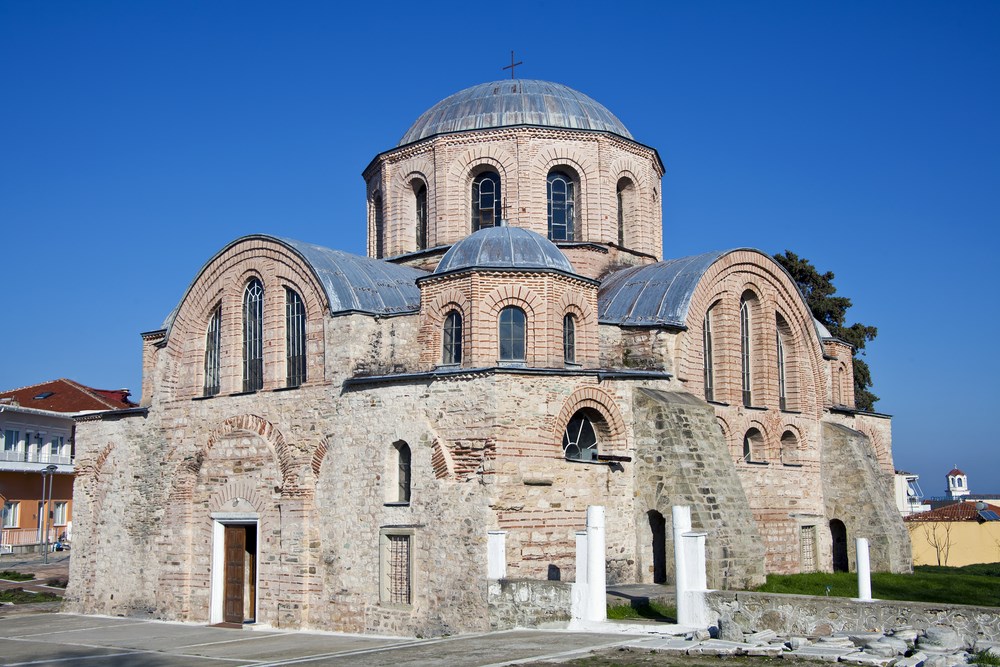 The Monastery of Panagia Kosmosotira (Virgin Mary World’s Saviour) is one of the most historic in Greece and the reference point of the Thracians Christians around the world.

It is located at the top of a hill in Feres, in the town’ center, on the place of the acient town Viras. Panagia Kosmosotira was founded in 1151 by the Byzantine Emperor Isaas I Komnenos, based on the plans of Hagia Sophia and survives 900 years later in a very good condition. We are lucky enough today, that people know the history of the Monastery’s  founder and its typikon, which was written by him, as well as the course of the monastery over the centuries.

The edifice of Panagia Kosmosotira is built by stones and bricks its style is cruciform with five domes. The central one has a diameter of 7 meters, with windows all around, which let the light come in making the dome look like hovering.

Every year, on August 15 that the Monastery celebrates, many people flock here, as Panagia Kosmosotira has been established as the World Pilgrimage of the Thracians.

The founder of Panagia Kosmosotira

Isaac Komnenos, after the death of his father, Emperor Alexios I Komnenos, in the conflict that erupted between his two brothers for the throne, he took the side of his brother John, who later became Emperor and gave him the title “Sevastokratoras” (meaning respectable).

At the age of 59 and while having already been affected by a disease that was leading him to death, he was found in Feres, the ancient Vira. As he describes, “near the banks of the river and in place deserted, without people or buildings, establish the Monastery of World Saviour and Mother of All”. It was the year 6,660 from the creation of the world during the 15th indiction, that means from 1st September 1151 until 31st August 1152 AC.

For the construction of Panagia Kosmosotira “Savastokratoras” gave almost all his fortune, while, until the end of his life, he was watching personally all the works. He died in 1152, shortly after the completion of the project and after he had written in detail the typikon of the Monastery of Panagia Kosmosotira. He was buried in the monastery, while the inscription placed on his grave still survives today in the Ecclesiastical Museum of Alexandroupolis. Although he asked from the monks to commemorate him daily in their prayers, he forbade them to portray him in the monastery.

The architecture of the Monastery

It is a fortified monastic complex, with a square tower of 8 meters height for the bells. Parts of the walls and the tower survive today in Feres, while from the rest of the buildings has only been preserved the Catholic of the Monastery, the Church of Panagia Kosmosotira. The main gate of the monastery used to be north, while from the east side the women entered the outer courtyard – only three times a year (on the Annunciation, the Nativity and the Assumption of Panagia), not for the monks to be scandalized, as referred in the Monastery’s typikon.

In the outer enclosure of Panagia Kosmosotira there was a second church, dedicated to Saint Procopius and a library, a sacristy, a cloakroom, a guest house, baths, a despotic room, a room for hosting officials, stables, workshop and big warehouses.

The most important building of the monastery apart from the catholic was the nursing home or hospital, which during its operation took care of helpless people from the surrounding area showing great work. Beyond the outer enclosure of Panagia Kosmosotira was located, with its own enclosure and chapel, the cemetery of the monks. Northwest of the Monastery and in direct connection with it, there was the aqueduct, which was constructed especially to supply the monastery with drinking water.

Panagia Kosmosotira is located at the crossroad of Via Egnatia with the Delta of the river Evros, an area of strategic and economic importance for Byzantium, with Isaac Komnenos establishing right away the settlement around the monastery, which was inhabited by farmers of the surrounding areas.

In Panagia Kosmosotira, a large part of iconocraphy and its sculptural decoration are preserved. Among the most important elements is the embedded, marble, embossed, single-headed eagle, symbol of the Komnenos dynasty. It is considered one of the oldest emblems of Byzantium and according to the researchers it proves that there was a royal tomb of the family.