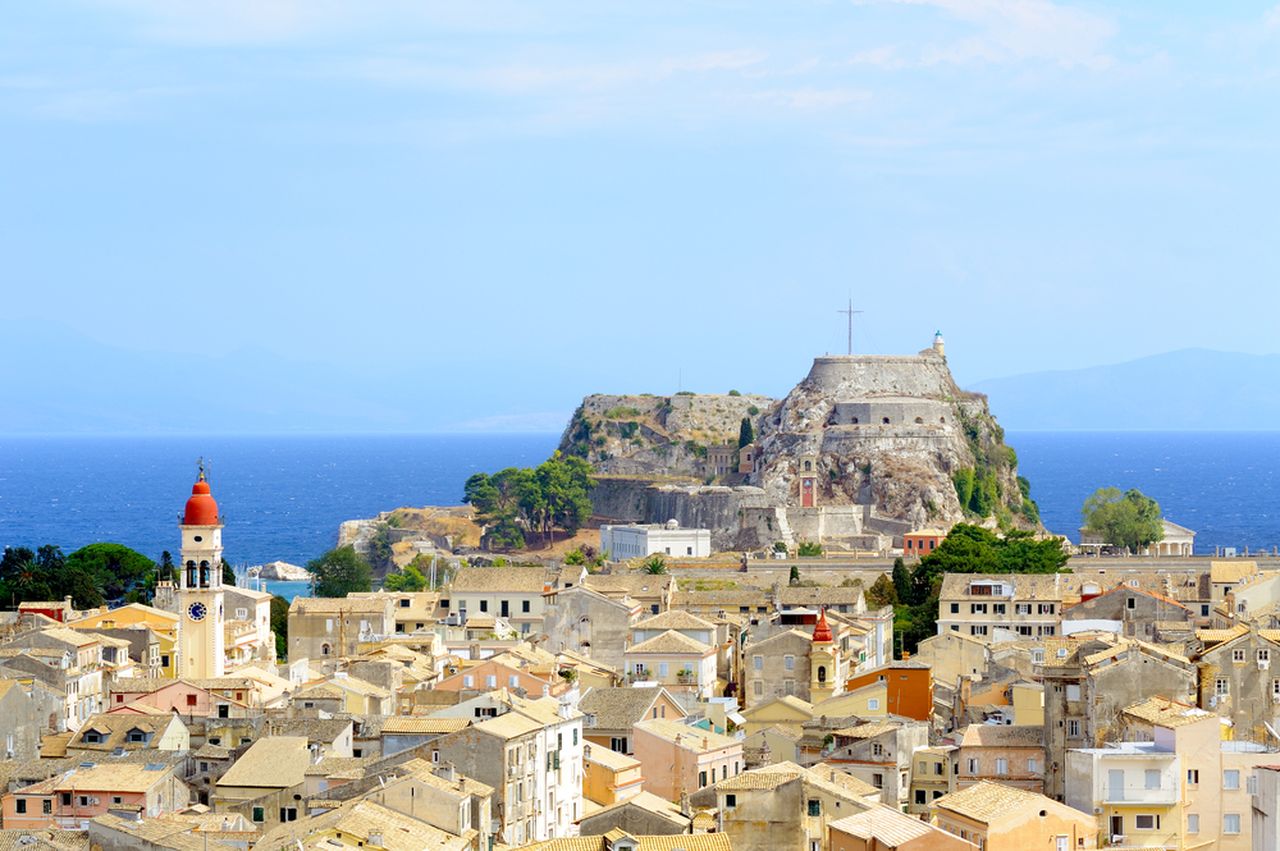 One of the most beautiful cities in Greece, Corfu, charms the visitor instantly. It’s not by chance that the whole old city  is declared a monument of the universal, cultural heritage of UNESCO. The unique architectural structuring, with tall buildings, kantounia – as the alleyways are called in Corfu, the small squares hidden between multistory buildings and the old mansions on one hand, and Spianada square, Liston and the two venetian forts of the city on the other, give Corfu a unique prestige. Point of reference for the Corfiots and the thousands of visitors of the island is Agios Spyridonas, whose relics are kept in the church with the same name as the saint which is a part of the center of religious tourism in Corfu. In the city one can distinguish influences by the venetians and also by the british-french occupation of the island which are depicted on its great sights.

In Corfu, one can find amazing museums, some of which are unique in their kind in Greece, such as the Museum of Asian Art  and the Banknotes Museum.

Don’t forget to visit the famous Kanoni, from where you can take a small boat to Pontikonisi, the most popular sight of Corfu. A stroll on the estate of Mon Repos is necessary in order to admire the summer house of the English commissioner, a masterpiece of neoclassical architecture from the 19th century which has been converted to a museum. In the same area, the ruins of ancient Corfu, called Palaiopolis, where the temple of Artemis Gorgous  of the 6th century B.C. can be found.

At whatever time of the year you may be in Corfu you will witness a cultural or religious event taking place. These are the greatest events in the city:

For your accommodation in the city of Corfu there are mainly hotels, of all categories and fewer rented rooms or apartments. Luxury restaurants, traditional taverns and fish taverns can be found in the old city as well as in the suburbs Mantouki and Garitsa. For coffee or a drink you should visit Liston as well as small coffee shops in the historical center, in Kanoni and Emporiko, the road which extends from the port as far as the village of Potamos.

In the city you can swim in the beaches of Mon Repos, Faliraki  and in the isle Vido, beaches preferred by the locals, especially the elderly and families for a short swim.

You can get to Corfu by plane, by ship from the port of Igoumenitsa, or by bus (KTEL). There is also a small marina in the city for a small number of boats of the Nautical Athletic Club Corfu, while the bigger and more organized marina can be found in Gouvia on the outskirts of the city of Corfu.

Corfu is identified by most archaeologists with the mythical island of Faiakes, the semifinal stop in the voyage of Odysseus to Ithaca, but with no findings to imply this theory. The first settlers who inhabited Corfu came from Eretria of Euboia around 750 B.C., but in 734 B.C. it becomes a Corinthian colony. At that period the city extends to the current Palaiopolis and became a significant commercial and naval force of the ancient world. The conflict between Corfu and the Mitropolis of Corinth from which it wanted independence became one of the causes of the Peloponnesian war.

From 229 B.C. to 337 A.C. Corfu was under Roman domination who used the island as a naval base for their campaign to the East. After the separation of the Roman Empire, Corfu is found on the eastern section and is subjected to the faith of the Byzantine Empire. By the end of the 10th century the city has expanded, as the monumental temple of Agion Iasonas and Sossipatros  testifies which dates back to that period and to this day is one of the most religious monuments of Corfu.

After the seizure of the Byzantine Empire from the Crusaders in 1204 the city is taken over by the Venetians until 1267 when it was conquered by the French Andecaves. In 1386 the Venetians return to Corfu and a long term period of seizure begins where the old city as we know it today was architecturally reformed. The fortresses like Palaio and Neo Frourio  were built to protect them from Turkish invasions.

Between 1797 and 1799, Corfu is taken over by the French army of Napoleon Bonaparte. From 1799 to 1807 the island is taken over by a singular Russian occupation during which the Septinsular Republic was introduced, the first Greek state after 1453, tributary to the Sultan.

In 1807 the French reconquer Corfu and define the island: They divert Spianada to a verdant square, they built Liston and establish the Ionian Academy, the first university of later Greece. In 1815 the Ionian Islands are recognized as a free and independent state under British protection until 1864 when they are united with Greece. In 1941 the Italians conquer the island and in 1943 it is taken over by German forces.